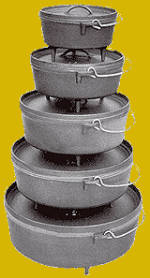 If you are just starting out and want a dutch oven, buy a 12 inch Lodge cast iron dutch oven and you will have a high quality, versatile, camping tool that will serve you well - end of story, go start cooking. Don't compare prices, don't try to find the best deal, just trust me and thousands of other dutch oven cooks that know Lodge is a good investment.
Or, check out some other options if you want...

Dutch ovens come in different styles, metals, sizes, and qualities. Take the following list with you to the store or refer to it when you buy online to make sure you purchase a good, usable item. It's easy to buy the wrong thing so take a few minutes to understand the features and costs of various dutch ovens.

Comments:
Mar 24, 2016 - Craig
Great article!  For the 12 inch, do you like the 6 or 8 quart?
Mar 25, 2016 - Dutch Oven Dude
@Craig - The 8 quart has extra depth that lets you cook bigger chunks of meat, like chickens or roasts, if you think you might do that.  But, it's a little heavier and the heat from the lid is farther from shallower foods. That just means you might want to move a coal or two from under the oven to the top and cook a little longer.
Mar 26, 2016 - Dave
I was wondering would it be better, if you're not sure what size ta get, should you get the larger 12" 8 quart, and will it still cook the vegetables and other foods like them without burning.
Mar 27, 2016 - Jon
I have a 10 inch and 12 inch lodge Dutch oven, I can't find lodge 14 inch Dutch oven anywhere under $200 any suggestions  or locations?
Mar 28, 2016 - Dutch Oven Dude
@Dave - Yes.  See the comment I left immediately above yours.

@Jon - Really?  A simple google just now showed them for $90 online and I bet you could find them at a local outdoor retailer, like REI, Gander Mountain, Cabelas, ...
Jul 27, 2016 - Jen
My girlfriend and I are vegetarians and love camping. I also happen to love cooking. I'm looking for a double duty Dutch oven that will work for camping and for at home use. Mainly for stews, soups, chili, sides, and the occasional cobbler or dessert. I'm wondering what size would be good for our uses.
Jul 31, 2016 - Dutch Oven Dude
@Jen - A Lodge 12-inch camp dutch oven works for me.  Make sure it has legs and is plain cast iron, not enameled.
Aug 02, 2016 - Terry
I was wondering if you could help me out.  We have a 12" dutch oven that we make cobblers in while camping.  I would like to know if I double my recipe if that will effect the outcome of the cobbler?  Or do I move up in size of the oven?  What would your recommendation be for doubling up on my recipe or getting a bigger dutch oven?
Aug 02, 2016 - Dutch Oven Dude
@Terry - Doubling the ingredients in the same size dutch oven means the food item will be very thick and will most likely not cook properly in the center.  For stews, soups, and such it's ok, but nor for baking and your cobblers would probably not turn out very well.
Since you already have a 12", you could buy a second 12" and cook twice the amount of one item.  Or, you could get a 16" and double the ingredients in one pot - but that's heavy and more expensive.
Aug 11, 2016 - Robin
I am wanting to purchase one for camping AND home use, are the legs absolutely necessary or would a "bean pot" be ok to use in a camp fire and home as well?
Aug 12, 2016 - Gene
Dude, just bought the book. Can't wait to try some recipes. Getting into this DO kick since I was getting ready for a camping trip and i found a 12" Setup by Camp Maid on a deal site. It has a pretty cool lid lifter/holder,a multi-tool stand, and other accessories for using your DO in ways most folks wouldn't even think they could. Are you familiar with them? What do you think?
Aug 12, 2016 - Dutch Oven Dude
@Robin - Without the legs of a 'camping' dutch oven, you would need to set the oven on a few rocks to keep it from smothering coals underneath it.  Legs really are important - so is a lid with a lip around the top to help hold coals and keep ash from falling into your food.

@Mary - A 10 quart, 14-inch deep oven could be enough.  I would use two 8 quart, 12-inch deeps and make two smaller roasts.
Jun 01, 2018 - Myron
I recently inherited a 14" Dutch Oven, without legs. It is contained within a wood crate, primitive nails, no screws, with a sliding top lid that has a metal plate held by hammered rivets as a finger pull with hole for a small lock. Plate is labeled COMPT. C PORT on it. Looks to be bronze or maybe brass, but not corroded. All research to ID this Dutch Oven fails on Google. Is there any expert out there that can identify what I have? No maker name, only crude raised 14 on lid and the numbers are cockeyed from one-another. on top outer edge of lid, 1 groove or dent mark and opposite side on top edge, 2 grooved dent marks. someones forge marking obviously. My brother was the owner, passed at age 69. He was age 10 when the oven was given to him by an 83 year old man, a California rancher and was supposedly that mans fathers. I'd sure like to track down the maker and correct age of this oven. Any help appreciated. Thanks.
Aug 08, 2018 - Devon Cloud
I am in search of a very large Dutch oven with legs... pretty sure no one makes them anymore.  Any idea on where to look for really large used Dutch ovens?
Aug 12, 2018 - Steve
I have #16 lodge Dutch Oven. Was told our mom bought in the 70’s.
Could that be true? Anyone know the years they where made?
Thanks
Aug 15, 2018 - Dutch Oven Dude
@Steve - Lodge stopped making 16-inch around 2000, then came back around 2003, then stopped in 2013.  Other brands are still made.
Aug 15, 2018 - Dutch Oven Dude
@Devon - There are quite a few brands making 16-inch dutch ovens.  Larger than that are more difficult to find.  Ebay often has some available.
Aug 20, 2018 - Dave
Wondering if you own any Dutch oven tables and if so do you like the higher walls that lodge offers or the lower ones? I have two 8qt 12's and was thinking on a windy day the higher wall might be helpful.  I pretty much have my mind made up but was just looking for reassurance.   Ever use any foil liners? I have never but see them and was thinking it may make clean up easy but am afraid it will affect the taste and experience.   Thanks in advance, Dave
Aug 28, 2018 - Karen Borozinski
Wondering if I can use recipes for a 12” DO in a 10”, 4 qt.

Kareny
Aug 28, 2018 - Dutch Oven Dude
@Dave - I cook on the ground, no tables.  A windbreak is definitely helpful on windy days, but a thin, light sheet of tin (or just aluminum foil) works well for me.
I don't use disposable liners, but occasionally use pie tins, depending on the food.

@Karen - Yes, you would just reduce the ingredient amounts by about 1/4.
Jan 05, 2019 - Lawrence Outdoors
I ran into someone who told me that "way back when" Lodge made a 18 inch Dutch Oven. Is this true? I have only ran into the 16 inch version. These 16 inchers must be pretty rare now as on   Ebay they are selling for $400-$500.
Feb 09, 2019 - Lee R Gates
Very good informative page.  Especially on 16 inch Dos.
May 27, 2020 - John
I have a 7qt Lodge dutch oven that did not come with a bail.   We now want to add a bail to the oven.  Any suggestions on how to put a divider in the handle slots (or other method) so the bail will be centered?
May 29, 2020 - Dutch Oven Dude
@John - I'm not sure what you're asking about a Divider.
There should be two spots cast into the DO across from each other where the bail is to be attached. All my DOs have the bail attached to opposite sides of those attachment points which keeps the bail centered when lifting.  See this image that might help where I've enlarged the attachment points.
Jun 22, 2020 - Doug p
Any idea if lodge will start making the 16" camp Dutch oven again? Also the 14" shallow would be nice! Any info about lodge re-making these two ovens?
Jun 23, 2020 - Dutch Oven Dude
@Doug - Your best bet would be to contact Lodge directly at lodgemfg.com but I've not heard any rumors of that happening.
Jul 31, 2020 - Geoff
When they say 10 inch oven is that measured at the top or the base ?
Aug 02, 2020 - Laurie
What is the difference between a Lodge Logic camp DO and a Lodge camp DO? On the Lodge site, they only talk about Lodge camp DO's but Walmart and Target sell Lodge Logic camp DO's for less. Is the Logic a lower brand?
Aug 02, 2020 - Dutch Oven Dude
@Geoff - inside dimension at the top.

@Laurie - "Logic" is pre-seasoned and I believe all new Lodge cast iron comes that way now - see this page.
Sep 12, 2020 - Ernest Kavoian
Did Lodge make a #14 deep dutch oven? I already have a shallow one?
Feb 23, 2021 - Joby
@Jon I know it's been a few years since your post. The 14" 10 Quart Deep Dutch Ovens are back in stock as of today. Here is a link: www.lodgecastiron.com/product/camp-dutch-oven?sku=L14DCO3